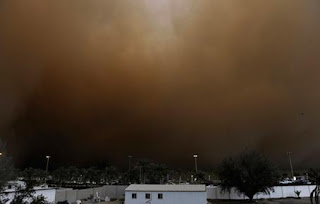 The dust that the sandstorm from Kuwait brought with it, on Friday night, had sneaked very swiftly and promptly into all nooks and crannies of my house. Even though I did my best to secure all windows and doors as soon as the wind started, these tiny, creepy, slippery, slithery, unkindly particles of dust laid themselves into thick layers on our sofas, table-tops, shelves and floors.

When I went down to see my car on Saturday morning, it was also clothed in an attire of such deep dark brown colour, that I had to pay extra to the man who washed my car. I also heard, from your newspaper, that the doctors had to treat dozens of people who went to them with dust-related complaints.

I have now, therefore, come to a firm conclusion that this sandstorm has been specially imported by house-cleaners, car-washers, and medical doctors to make an extra buck, through a wicked multi-national conspiracy.

There is an immediate need for sandstorms — and those importing them — to be strictly warned against further infiltrations like this, and also a grave need for the government to also consider putting up a dust embargo, on neighbouring regions. This dust-to-dust free-trade imbalance should not be tolerated.

To see this letter in Daily Tribune click here

But it is ok now

The havoc wreaked by the earthquake and the tsunami that hit Japan, on Friday, is truly immense.The lives lost, the people injured, the buildings ruined, and the property damaged, makes it a heart-rending tragedy. I really wonder how many years it will take to rebuild the places which had to face this completely unforeseen devastation and destruction.

Despite the latest advances in technology, and the so-called accurate meteorological and seismological knowledge that our generation possesses, it is really proof again that humans together hold but a minuscule power to fight the forces of nature. And, as if nature's fury was not enough, the blasts in some Japanese nuclear plants, made by man, are likely to cause deadly radiation, threatening the survival of thousands.

One way to look at all this is with resignation. That man is completely incapable of predicting earthquakes and many other natural disasters, and must take all these acts of God, as completely unreasonable on His part, and get angry at Him.

Another way to look at this is with determination. That man is blessed with a unique ability to cope with situations like these. The very fact that man can predict hurricanes, storms, and rains, to determine their motion paths, and to plan warning systems, evacuation methods and rescue operations, are what makes life challenging.

It is the second act that we must consider a precursor to the ‘triumph of life’; when determined people around the world, can come together to help this nation in distress, in uplifting it as it regains its footing, and in helping it pursue relief and recovery much faster than what is expected by all.

Japan has risen from the ashes of Hiroshima and Nagasaki - like the pheonix - to show the world what a great country it is. And I am sure, with help from countries around, it will do it again!

Our hearts are with you, Japan. And we wish you a speedy recovery.
at March 14, 2011 No comments:

Phil Collins lays aside his drumsticks

Uh ho. Phil Collins has called it a day? How can this great singer retire? So quickly? When even the much older Mick Jagger is performing on Grammy's Stage shows still?! But then, he must have his reasons.

But while he performed, he was a great entertainer as a drummer and singer - whether as a member of the group, Genesis, or whether as the solo artist himself.

I cannot forget all the wonderful songs that he regaled me with, and those several millions the world over. I am sure his songs will keep going on around the world; whether in the form of songs on radio, videos on television, CDs in stereos, or as MP3 files over the internet. Against all odds, Sususudio, True colors, and Another Day in Paradise are among my favourite hits of Phil Collins.

Here’s a bit of trivia for people. Phil Collins is perhaps the first, if not the only person, to perform on the ‘same evening’ in UK and USA! He performed at both Wembley Stadium and JFK, utilising Concorde, the supersonic jet, to get him from London to Philadelphia, before it was evening there!

UK TV personality Noel Edmonds piloted the helicopter that took Collins to Heathrow Airport to catch his flight. Aside from his own set at both venues, he also provided drums for Eric Clapton and the reunion of the former members of Led Zeppelin at JFK.

By the way, he had won seven Grammys and one Oscar, not much mentioned in his news of his laying aside his drumsticks for good.

Where is pakistan's voice?

Yet again, a man is brutally killed for speaking against the blasphemy laws of Pakistan. Shahbaz Bhatti, the sole Christian government minister of Pakistan was shot dead in Islamabad last week. Ironically, he was the minister for ‘minorities affairs’ in a country which has the majority, 95% of its 180 million population, as Muslims.

So, what is the protection for minorities in a country where a Minister of Minorities could be shot dead in broad daylight, for holding views contrary to the majority? And what is the state, when the majority simply stands and looks away, extremely tired, worryingly fearful, and indifferently silent to condemn this gross intolerance? What is this strange paralysis that grips and prevents intelligent people of Pakistan from voicing out against this violent extremism in the name of Islam? Tehreek-e-Taliban Punjab has proudly accepted the responsibility of killing Bhatti and, except for a few hackneyed phrases of bringing culprits to justice, there is no concrete condemnation, let alone action, from the country’s top officials.

Just a few days earlier, on January 4, Pakistan’s Governor of Punjab province Salman Taseer was also gunned down. By his own bodyguard described by many as a fanatic, but hailed as a hero by some religious groups and even lawyers. The killer allegedly said he was angry with the governor's stance on the same blasphemy laws.

Farhat Taj, a researcher and writer on Taliban, says that both these men had been vocally opposing Pakistan’s notorious blasphemy laws and publicly supporting the release of Aasia Bibi, a poor Christian woman implicated in a dubious blasphemy case. Both had been publicly highlighting legal flaws in the blasphemy laws. Saying that these flaws are used by some to victimize innocents. And what do these two get for speaking about the flaws in the blasphemy laws? What do they get for saying that these laws are draconian, and need be revised? What do they get? Murder. Death.

The thousands of people who thronged the roads in Khushpur, a Christian-dominated village of around 10,000 in eastern Punjab province, chanting slogans demanding justice as Bhatti's body was flown in and driven through in an ambulance covered with rose petals, are indicative of the respect the dead man had commanded. But what he did not command, and what he had to eventually fall down for, was the hatred and anger of killers who consider themselves sole guardians of Islam.

The Pakistani Prime Minister Yousuf Raza Gilani praised Bhatti and told an audience that included U.S. Ambassador Cameron Munter, that "People like him (Shahbaz Bhatti) are very rare, I assure you, we will try our utmost to bring the culprits to justice." But it seems unlikely that anything is going to happen quickly, in bringing the killers to justice. Somehow, the State looks weak in the face of Islamic extremism.

I flinch as I type the phrase ‘Islamic extremism’ because no religion should be ever associated with extremism of this nature. And more so, Islam, which is supposed to be a word derived from the Arabic root "Salema" meaning peace, purity, submission and obedience. But atrocious acts like these by misguided elements have created this now ubiquitous but unfortunate phrase.

I heard BBC’s radio interview on this, with Bishop Michael Nazir Ali, who was earlier the Bishop of Punjab in Pakistan, and served later as the Bishop of Rochester in UK, say that the real problem in many parts of Pakistan is the indoctrination of the young into a hatred for anything non-Muslim. He says the growing indifference and intolerance is a result of years of teachings in the madrasas which drip-feed hate. And he calls for Muslim scholars to revamp what is being taught in some religious schools. But listening to contrarians seem to be an endangered phenomenon here. Some minds stubbornly want to stay closed.

While we do not yet know the solutions, what we do know is that only when a country is tolerant to accept diverse views and contrasting ideologies can it raise a new generation of forward-looking, open-minded individuals who eschew violence and embrace peace. And those wanting that change must let their voices be heard.
at March 06, 2011 No comments: