I found this news-item, SAP to pay $1.3bn to Oracle for theft, really attention-grabbing (Daily Tribune, 25-Nov). Mainly because, we all know that both these companies are among the superpowers of the software world. So, even if SAP is going to appeal the verdict, this highest ever verdict on copyright is going to send signals to all about the importance of protecting intellectual property rights, especially in software.

But I feel there are billions of dollars that software companies are losing not because of their competitors, but because of normal, innocent-looking, individuals who copy software, or download it, without paying anything to the copyright owner.

I understand that many software companies are actually pricing the products high because they know that once the original is out – with no matter how strong their embedded anti-duplication locks are – people will rip them, copy them, and do not give back anything to the company, the real genius, behind the making of the product. So, obviously, companies are wanting to earn as much revenue as possible with the launch sale.

My suggestion to these software companies is to reduce the prices of their original products to the lowest extent possible, so that people can be attracted to buy the originals and avoid copies.

But I believe the tactic of lowering prices could help. Then, hopefully, all across the planet, we shall see more legal copies, whether of simple Microsoft Office, or of complex ERP from SAP.
at November 26, 2010 No comments: 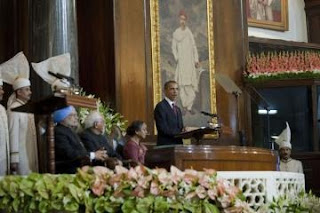 So, is it ok for US to deal with non-democratic governments, but it is not ok for India?? He must know that what's good for the goose is good for the gander.
at November 21, 2010 No comments:

Haiti's rice farmers are unable to compete with US imports of rice. This is what I heard on a BBC Radio, driving home a couple of days ago.

And why are they unable to compete? It was soon revealed that US is actually dumping rice at extremely low prices, in Haiti. And, obviously, the local farmer cannot compete against the lower prices of this US import which they call, ‘Miami rice’. When he can’t sell it, why would he produce it?

It begs another question - how come US rice is sold at such low prices here? The answer is simple. It is because the US farmers can afford it. They are getting government subsidies!
Not just me, but anyone listening to the programme would have cried, ‘unfair’! And quite rightly so.

Haiti is a poor country struggling to rise up after that devastating earthquake, and the big nations like US are selling Haiti the same food stuff, that Haiti should be encouraged to grow domestically. In fact they are killing the local market by under-cutting on prices of imports. What kind of justice is this?

On reaching home, after a bit of googling, I discovered a few more shocking truths. Haiti’s rice production had actually plummeted over the last twenty years or so, thanks to imports.

In 1980, Haiti was virtually self sufficient, on rice. But today, it actually imports 80% of its rice! Why? It is because western countries forced it to liberalize its economy in 1994. And it had to cut taxes on imports. And quickly, rice imports went up. Local rice production went down. Way, down.

And here’s another interesting tit-bit. Did you know that $434m paid in annual US rice subsidies is more than the total US aid to Haiti of $353 million?

No wonder, therefore, that Oxfam, the International Aid Agency is urging US to stop subsidies on rice to Haiti. According to Oxfam, agriculture must now be a priority for Haiti’s Reconstruction efforts. And it is asking international donors and developed countries to come forward and help Haiti recover. Especially, in contributing to Haiti’s new $772m agriculture plan.
For a start, US should begin promoting agricultural growth in Haiti. And stop its sale of agricultural produce if it can be locally grown by Haitian farmers. And the developed nations must assist Haiti in becoming self-sufficient.

So, for Haiti, is it indigenous rice? Or imported rice? Let’s hope that better economic sense will prevail. And not Miami Vice......I mean..... Miami rice.