Watching ‘Bhavahara’, the innovative experimental dance ballet, organized by the Indian Institute of Performing Arts, was an enjoyable and uplifting experience.

It's hard to believe that all the dancers and actors of this dazzling performance - held at the Cultural Hall in Manama yesterday - are those living in Bahrain, and not professionals brought into the country. And all these amateurs' hard work of months of rehearsals yielded a mesmerizing spectacle of dance and music.

The evening was presented to the audience in two parts - Saama Gaana, a music concert and  Bhavahara, the dance ballet.

Pleasing Carnatic Music - by the renowned singer P Unnikrishnan - as a part of the concert, aptly set the stage for the ballet.

The vocalist, who flew in from India, regaled the audience with a few Tyagaraja kritis, and other compositions, effectively energizing everyone; especially those from Telugu, Tamil and Malayalam backgrounds.

I felt the recital’s duration was just enough for the audience, to appreciate this form of classical music from South India. And not long enough to make anyone impatient, in case they were waiting solely for the dance ballet.

He was accompanied on the violin by Jaydevan, and on the mridangam by Neyvelli Venkatesh, both of whom, by the end, proved they were stalwarts in their own rights.

In a pleasant surprise, I learnt on Friday night that P Unnikrishnan was the same playback singer who had sung one of my favourite Telugu film songs, ‘O cheliya naa priya sakhiya’, and its original Tamil version.

[Somehow I’d never liked the movie’s computer graphics in that particular song (the movie was called 'Premikudu' in Telugu)  shot on the lead actors Prabhu Deva and Nagma. I’d always felt that the silly graphics did not match the classical nature of that soulful number. And I still feel the same. Strongly. But that is beside the point].

Coming to the ballet ‘Bhavahara’, I must say, it was a visual and aural delight. It was a spectacular show that uplifted the spirits of the audience. It did not matter if the audience was aware of the Hindu epic Mahabharata, or of those particular scenes from which this ballet drew. It just touched the senses aesthetically, and emotionally.

Whether it was the introductory scene of Kunti’s mental turmoil - as she dissuades her first born illegitimate son Karna, from fighting his brothers in the Kurukshetra - or whether it was the scene of Karna’s own battle within himself - as his mind wonders how he could be disloyal to his friend Duryodana who gave him, an outcast, the respectable status of the King of Anga – the dancers portrayed the varied emotions with excellent expressions and movements.

I just wished there was more stage time for Krishna, whose costume – even without the normal peacock feather in the headband, or that wooden flute in his hand – was beautiful; just like his fluid moves, and graceful swirls, the hallmark of Kathak, resplendent in its excellence.

This particular artist, who played Krishna, deserves a very special mention. This young man is perhaps the only Bahraini man, who is a trained exponent of Kathak dance. And he seems to have performed it to perfection. This dancer, Khalil Al Ashar, will remain a pioneer, when it comes to Indian classical dance performers from the Arab region.

Maybe the diction, and pronunciation of some spoken words could have been fine-tuned to an even higher level. But it has not, in any way, diminished the beauty of the stage performance that left the audience wanting for more, when it ended. Just like how a good stage performance should be.

Apart from excellence in choreography, there was remarkable management of sound, coordination of lighting, elegance of sets, appropriateness of props, illustrations of projections; and they have all showed that tremendous dedication and hard work had bound the team, as they brought their dream project to fruition.

Once it started, the scenes flowed in an unfaltering smooth manner, despite the complexity of the number of people involved, and the quick changes of props. The projection of visuals added an element of creative distinction.

Clearly, the cast and crew of this alluring pageant had worked overtime to give us a performance that makes us think of Broadway.


Let us hope that IIPA (Indian Institute of Performing Arts) under the leadership of Mr Ambillikuttan, and the dance-drama team, under the direction of Dr Nidhi Menon (who had also played Kunti, apart from efficiently conceiving and directing the ballet), will bring us more such sparkling performances in future. 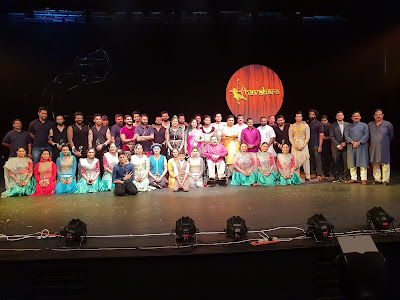