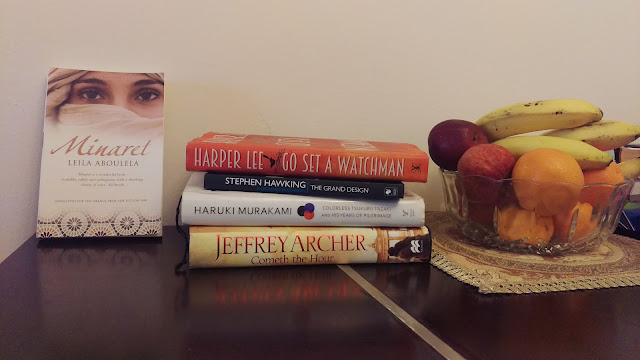 I discovered I had written these reviews, but had not posted these earlier.

A heart-warming story of a trendy and bubbly young Sudanese girl whose personal life is completely thrown into turmoil, after a political coup in Sudan.  Written in the first person, she tells us how she stoically faces the trauma of her rich-politician father's arrest in Sudan, of her exiled state in London with mother and brother, and of her envy of classmates who become successful --- when she is reduced to work as a maid in rich London homes.

I loved the way the character bares her soul, about her feelings of affection towards a young Sudanese revolutionary, about her handling of jealousy and betrayal,  and about her most important choice ahead. Can she be a true Muslim?

This novel was in the running for the Orange Prize and the IMPAC Dublin Award. And I am glad I bought it at Bahrain Airport in September. I give it three-and-half stars.

I‘d enjoyed her prequel 'To Kill a Mocking Bird'. Twice. Once, as a reader of the book, and once as a listener to the audio Book. And, on both occasions, I had become completely immersed in the happenings of Maycomb County, and in its people. Therefore, I was glad to have received this sequel, as Birthday gift last year (Thank you, Preeti Borde!). The setting of this book is twenty years after the earlier book. And we see the now-grown-up Scott Finch battling with her father Atticus, against his values which seem to have changed  (The character Atticus Finch, btw, is right on top of the ‘greatest cinema heroes’ according to American Film Institute. Beating the likes of James Bond, Indian Jones, Rocky Balboa, Han Solo,  Superman and Tarzan. Go on. Google the name!)

I must say this book was a bit of a let-down. It may be of great value, due to the exceptional literary skill of the author. But when compared to her earlier book. Sorry. Not up to the mark. I give it only an overall rating of three stars.

A well-done treatise on the history of scientific knowledge, over centuries. From stories like those of Skoll and Hati, the wolves, which cause  eclipses, in Viking mythology (comparable to Rahu and Ketu, the demons, in Hindu Mythology) to the latest analysis of the Theory of Everything and M-theory, the book traverses a path that is bound to be 'fun reading' at times, and ‘extremely difficult’ at times. Especially, if you are not a reader inclined towards Science.

During my B.Sc or University days, one of the prescribed books for my third year was J B Rajam's 'Atomic Physics'. The extreme labour to which our Physics lecturer had subjected us, has finally paid off! Thanks to him, I am now able to grasp at least some of this book's mind-bending explanations. As topics like String Theory or M Theory were non-existent in our text books then, it was hard to follow these new theories on quantum mechanics. But, the authors tried to make it as simple as possible to make us understand, well, 'The Theory of Everything'!

Last two chapters went over my head, but the summary of my learning is this: The Origin of Universe (they actually use the term 'Multiverse') does not require God. There is, apparently, a Grand Design. But there is no consistent scientific model to explain the origins effectively, or to show us a designer. Okay, I am giving the book Four Stars. Just to sound erudite ;-)

(4) 'Colorless Tsukuru Tazaki and His Years of Pilgrimage' by Haruki Murakami, 2013.

What do you do when all four of your best friends’ have a colour’s name in each of their names, and you don’t? You could feel colourless; and even develop an inferiority complex. And what do you do when four of them (two girls and two boys) suddenly banish you from that wonderful five-member-high-school-group which you’d enjoyed being a part of? And when they refuse to even tell you why?

You can get suicidal. And Tsukuru Tazaki contemplates suicide. But, yet, struggles and tries to move on. But is continuously depressed.  Until, many years later, a girlfriend persuades him to go and confront the ghosts from his past.

Now, as he goes back to his friends, who are now with spouses and kids, the mystery of his banishment starts to unravel.

The book builds up the suspense and tension, and the struggles, very effectively. But, somehow, personally, I felt the book became a bit disappointing, towards the end.

It is my first reading of a novel by Murakami. But it is the successful writer's thirteenth novel. I did not like this book much (But I am told that I should not miss his ‘Norwegian Wood’. I hope to get a copy soon).

He may be a successful writer. But for this book, I’ll give three stars.

The sixth book of ‘The Clifton Chronicles’, the penultimate one kept me in its grip from the beginning to the end, like the five books in the series, earlier.

As the story of the Barringtons and Cliftons, which began in 1920 in the first book, moved into the 21st century, it had all the twists and turns, surprises and shocks, that you'll find in all his books.

Indian friends might like the character called 'Priya', and the minor references to Indira Gandhi and Rabindranath Tagore.

I feel the author knows, for sure, that he has a huge Indian readership. . and he catered to the segment well.  Three-and-a-half stars.